A gathering place for stand alone novels and short stories not part of a greater series.

Blooded
A broken mage. A penitent vampire. Can they put aside the horrors of the past to save each other?

Plagued with erratic. volatile magic, Nicodemus Green focuses his entire life to stop an evil sorcerer who brainwashes or kills anyone in his path to domination. Ten years into this crusade, Nick stumbles upon his former Academy instructor in the Austrian Alps. The strict and pious Byron Domitius has cloistered himself in an isolated manor. Alone and starving, he hates the twisted, damned creature he has become.

A prophecy calls for Nick and Byron to bond by blood to finally bring an end to the sorcerer’s hidden agenda. The two are forced to see beyond their shared past, and Nick finds himself desiring more from his old instructor than just his magic. But are these emotions real, or do they come from the heat of their bond?
Available at these Retailers 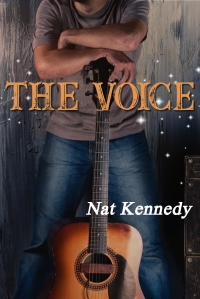 The Voice: Short Story
John Bachman has a magical voice. Literally. His country music sinks deep into a person’s mind and puts everyone in a happy, uplifted, positive mood. His concerts are packed. His fans uncountable.

His fans are dedicated.

His fans are focused.

His fans are dangerous.

Kenny Colorado is one of many personal bodyguards assigned to protect John from his most rabid fans. Kenny excels at his job. Unfortunately, John excels at being John.
Available on Amazon