Themes: Taking a chance on love, running from your past, trust, friendship, found family 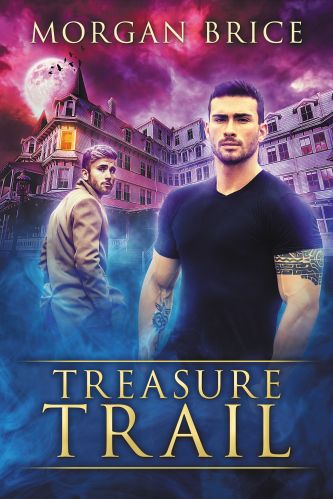 When a missing antique shows up under mysterious circumstances, Ben and Erik are plunged into danger as a cursed hotel’s long-ago scandals resurface. Someone wants those secrets to stay buried—and is willing to add Ben and Erik to the death toll to keep the past hidden.

Erik Mitchell traveled the world uncovering art fraud and relic theft, which pitted him against spoiled billionaires, unscrupulous collectors, mobsters and cartels. He worked with law enforcement across the US and Europe, but a sting goes wrong and Erik ends up injured, then returns to find his partner cheating. Erik decides to stop globe trotting and buy an antique shop in scenic Cape May, NJ, rebuild his life, and nurse his broken heart.

Undercover Newark cop Ben Nolan went down in a hail of bullets when a bust went sideways, after a tip-off from a traitor inside the department. After he recovers, he spends a couple of years as a private investigator, only to tire of seeing the worst of human nature. So when his aunt offers him the chance to take over her rental real estate business in Cape May, it seems too good to be true. Now if he could just believe he could ever be lucky again in love.

When a missing antique shows up under mysterious circumstances, Ben and Erik are plunged into danger as a cursed hotel’s long-ago scandals resurface. Someone wants those secrets to stay buried—and is willing to add Ben and Erik to the death toll to keep the past hidden.

“If the show proposal goes through, it will really put Treasure Trail and Trinkets on the map!” Corinne Scott had the bouncy enthusiasm required of an agent, and it came across as clear over the phone as it did in person.

“It’s exciting, but let’s wait before we break out the champagne,” Erik Mitchell protested. He had been dealing with the chaos of unpacking boxes and living out of a suitcase for two weeks, since his move to Cape May, New Jersey, and the complete uprooting of his life. “If they’re counting on using my supposed notoriety to sell the show, they might be disappointed. There’s a lot I can’t talk about—and it’s mostly the exciting parts.”

“You traveled the world stopping art and antiquities fraud,” Corinne continued, undeterred. “It’s like something out of Indiana Jones.”

Erik winced. Much as he loved those movies, Indy was more like the kind of guy he helped bust for swiping relics. “Um…not really. I spent a lot of time in the back rooms of museums going over old stuff with a magnifying glass. And I only got shot at a few times.”

That was enough. A collector with a very rare Fabergé egg music box wanted Erik to authenticate the egg for the buyer. Unfortunately, there were other interested parties, and they all brought more muscle than brains. The deal went sideways when they decided to negotiate with guns; all hell broke loose, and Erik nearly died. He ended up with a concussion, a bullet wound in his shoulder, and nightmares verging on PTSD.

“This wouldn’t be anything so dangerous!” Corinne was in full sales mode now. “It’s only six episodes, and it’s the local PBS station. All the crimes have already been solved. You’re just on camera for the expert cameos, and to toss out some advice on how to avoid buying fake art or accidentally stealing priceless relics.”

The longer Corinne talked, the more Erik became convinced the whole TV show was a colossal mistake. He had relocated to Cape May from Atlanta to get away from the sensational—and dangerous—aspects of his old life. Sure, chasing down art fraud had been his dream job, like something out of a thriller novel. His younger self had relished the constant travel and intermittent danger, and the work paid well—in headlines and in a very healthy salary.

Then there was the clusterfuck bust and Erik’s injury. He realized that he was ready to move on, settle down, and step out of the spotlight. He’d thought his boyfriend, Josh, would be happy about the change. Then he got home a few days earlier than expected and found Josh banging Erik’s personal assistant on the dining room table.

After all the shouting and tears were over, Erik found himself single and lacking an assistant. He’d decided right then to leave his old world behind. That meant getting out of Atlanta, out of the apartment he’d shared with Josh, and going somewhere he could get a fresh start. 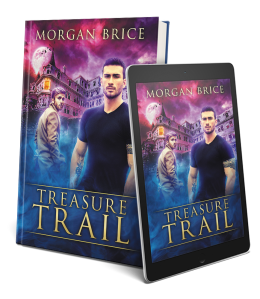 Morgan Brice is the romance pen name of bestselling author Gail Z. Martin. Morgan writes urban fantasy male/male paranormal romance, with plenty of action, adventure and supernatural thrills to go with the happily ever after. Gail writes epic fantasy and urban fantasy, and together with co-author hubby Larry N. Martin, steampunk and comedic horror, all of which have less romance, more explosions. Characters from her Gail books make frequent appearances in secondary roles in her Morgan books, and vice versa.

Other books include Witchbane, Burn, Dark Rivers, and Badlands. Watch for more in these series, plus new series coming soon!

Join my Worlds of Morgan Brice Facebook Group! Get the early scoop on upcoming books and new series, see new covers first, enjoy insider news and special contests and giveaways! Plus it’s where I get my beta readers and launch team!

Sign up for my newsletter and never miss a new release

Enter the Rafflecopter Giveaway for a chance to win

your choice of ebook from Morgan’s backlist and a $10 Amazon gift card.

Follow the tour and check out the other blog posts here