You’ve seen the cover (amazing that it is), now it’s your chance to get the book. Finally, D’Vaire #13 is out!

Buy at Amazon US and Amazon UK 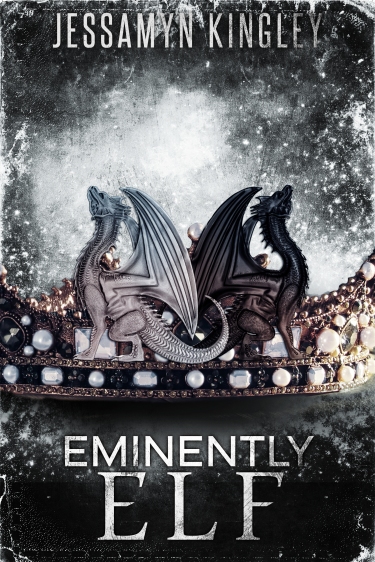 Even for a legend, victory has a price.

Emperors Chrysander and Ellery Draconis are in love and looking toward the future. Ellery is the first hybrid to survive a dragon shift, becoming a legend. Chrysander couldn’t be happier with his elf dragon, and for the first time he is truly savoring life. Despite the demands of their schedules as the leaders of the Council of Sorcery and Shifters, the pair have also managed to find balance. But not everyone is happy to see the leader of the dragons with a half-elven mate.

As the two go about their daily business, those sworn to protect them work tirelessly each day to ensure the safety of their emperors. They lived through the horror of the previous rulers being murdered and are all too aware of the dangers that lie in wait. Nothing is left to chance, but regardless of their dedication, not even they can prevent evil from rising from the mists.

On a seemingly ordinary day, an unexpected attack shocks everyone. A matebond is taken to the brink and the limits of magic are tested as the strongest forces unite to try to repair the damage. It will take time, patience, and perseverance for good to prevail. Chrysander and Ellery will once again overcome the odds and emerge victorious, but in the end, nothing will ever be the same. 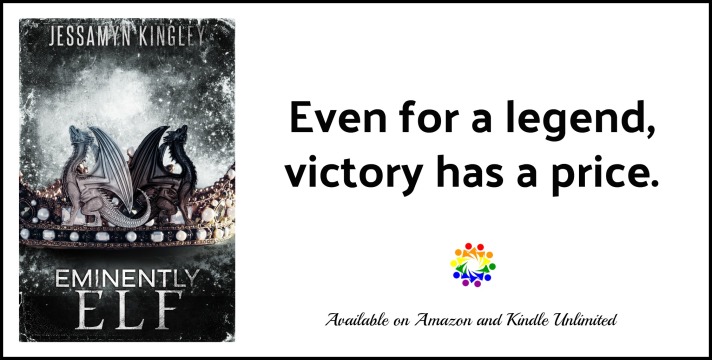 Ellery tugged the linen top of his pajamas over his head and crawled into bed. There was noise from the sitting room that told him Chrysander wasn’t ready to join him yet. With a shrug, Ellery picked up the tablet on the nightstand and went through the notes Zane sent him regarding the next vote in the Main Assembly Hall. Out of the corner of his eye, he saw Chrysander stalk into the room and keep going until he’d shut himself into the bathroom.

When he emerged several minutes later, he still had a loose pair of black pants on that he’d donned when they got upstairs.

“Are you all packed?” Chrysander asked as he climbed up onto the mattress and crawled over Ellery.

Setting his tablet aside, Ellery smiled at the handsome dragon as he got closer to him. “Yes, I think so. It is so strange to think of moving into a hotel tomorrow.”

Chrysander kissed him and settled his weight comfortably over Ellery. “Damian’s probably going to stay up all night memorizing the floor plans. He’s not going to be happy until we get back here and the condo is finished.”

“He has been very pleased that he and your brothers are in charge of the security features in this place.”

“And that we gave them carte blanche. It kind of scares me how much technology Damian is going to put in this place. I don’t want to have to do a retinal scan to use the bathroom.”

Ellery slid his hands into Chrysander’s thick hair. “That would be inconvenient.”

“We’re going to have to wrestle more control from Wesley. He can’t skip informing our security about things like having a giant-ass buffet at the back of an enormous throne room, blocking the main doors.”

Ellery didn’t want to talk about Wesley. The truth was, he could hardly stand the office assistant, and he would bet all Tiri’s swear word money that the feeling was mutual. “He has been too comfortable in his role, perhaps.”

“He does a good job. He just needs to be reminded of the rules. I was so damn busy before that I truly had no choice but to pass a lot of things off to him. Our schedule’s lighter now, and the royal family should be making these decisions.”

“Other than the food fiasco, I thought the ceremony went well.”

“He gets nervous that he will disrespect Zane in some way.”

Chrysander lifted an incredulous brow. “How could he ever do that?”

“I have no clue. He is amazing, and he loves Zane very much.”

“I should tell you something.”

“I love someone very much as well.”

Ellery eagerly accepted Chrysander’s kiss. “That is interesting. Is it anyone I know?”

“You might’ve heard of him.”

Lifting his chin so Chrysander could better nibble Ellery’s neck, he tried to keep the thread of their conversation going while his body hummed with the desire that always rested just below his skin for his other half. “Can you be more specific?”

After leaving a trail of soft kisses over his jaw, Chrysander tongued the two earrings Fate left in Ellery’s ear after they were mated, which always drove him wild inside. “He’s an elf.”

Ellery wasn’t sure why everyone insisted on focusing on that part of him first, but his dick was hard, and he wasn’t going to get into a disagreement with Chrysander over it. “Just an elf?”

Pushing his hands under Ellery’s tunic, Chrysander slid his palm over the muscles of his belly. “No, he’s a hybrid.”

“That is certainly interesting,” Ellery managed as Chrysander toyed with one nipple.

“They say dragon mixes die at their first shift, but not my mate.”

Ellery spread his legs and bent his knees, cradling Chrysander’s hips between them. The thick length of Chrysander’s cock bumped into his and caused him to let out a moan. “I may have heard of him.”

“He’s the most beautiful dragon in the world.”

Clutching Chrysander’s short locks tighter, the dragon brought his lips close enough to taste. Ellery dipped his tongue in, and their mouths were way too busy for words as he undulated against Chrysander, suddenly desperate for any kind of friction.

Jessamyn Kingley lives in Nevada where she begs the men in her head to tell her their amazing stories which she dutifully writes it all down in what has become a small mountain of notebooks. She falls in love with each couple and swears whatever book she wrote last is her absolute favorite.

Jessamyn is married and working toward remembering to start the dishwasher without being distracted by the scent of the magical detergent. For personal enjoyment, she aids in cat rescue while slashing and gashing her way through mobs in various MMORPGs. Caffeine is her very best friend and is only cast aside briefly for the sin better known as BBQ potato chips.

She loves to engage with readers there.

Check out the other blog posts here 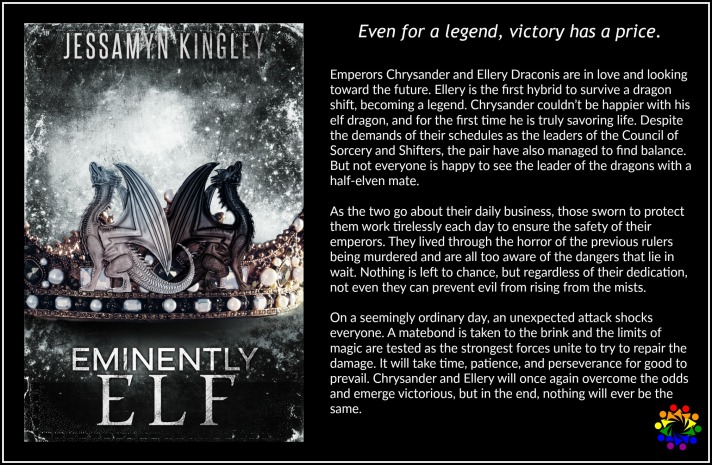