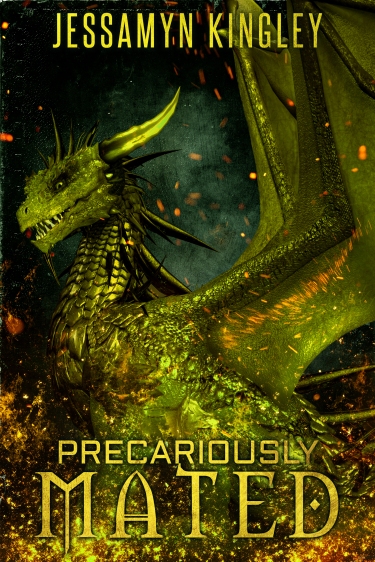 A precarious road is no match for an enduring friendship of two strong hearts.

At the tender age of eighteen, Prince Niko Kyrkosdraconis finds himself at a dragon fair, trying his best to maintain his strict schedule of rituals that have followed him since birth, when Fate steps in. The appearance of two strangers alters the course of his life, and Niko sets upon an unforeseen path. Centuries later, Niko is doing whatever he can to pick up the pieces of his shattered world. Unsteady and uncertain, he struggles to place faith in both himself and those around him. Much to his surprise, he finds himself with a new best friend who he grows to trust like no one else before.

Royal Duke Costas Draconis is happy to be back with the men he calls family after ten years of caring for his irascible parents. Having a knack for money, he is once again entrusted with making the dragons prosperous. Costas is surrounded by loved ones and thriving on the outside, but deep inside he yearns for his mate. Then Niko comes into his life. Costas loves the time they spend together, especially their nightly talks on the roof deck, but he must constantly remind himself that the man is not for him.

Niko and Costas go to great lengths to hide their feelings for one another and everyone else, fearful that the future holds nothing but heartache. But things are never what they seem, and Fate will always have the last word, even when you doubt her. As the obstacles before them are slowly peeled back, will Costas and Niko find a way to call each other mate? The road ahead is precarious, and in the end, Fate will have her say, and only then can Niko and Costas prove that the strongest hearts will prevail.

Niko lifted his beer to his lips and drank deeply. It was a bit cool outside as the sky darkened, but he wouldn’t dare retreat indoors—not unless he and Costas could find another beautiful spot to hang out and discuss whatever topic burdening their minds. It was not a ritual but a tradition they’d built since the moment he arrived.

“Why are you grinning at your beer?”

Glancing up, Niko smiled brighter. “I just realized it’s been three months since I moved here.”

“Yes, and this was the second week in a row I was able to handle scrubbing my bathroom and bedroom only two times.” He refused to feel ashamed of those moments when his anxiety ruled over everything and he had to give in to compulsive actions. There were days when he went to bed happy that he’d only obsessed over things he didn’t want to forget and others where he was frustrated that even while trying to rest he felt tension. It was all a part of who he was, and just like the thoughts that still circled until he forced himself to stop listening, Niko handled it the best he could.

“Is there anything you haven’t succeeded in since you arrived?”

“I don’t think I’ve improved very much with my cooking,” Niko answered thoughtfully. The men in the house didn’t complain, but so far nothing he’d made was tempting to his own palate. Maybe he was being too picky. If his new family enjoyed it, then why couldn’t he? He wished he had more time to experiment but with his rituals, desire to read books to improve at his job, and the schedule the royals had to maintain with events he had to stick with weekends and one or two nights a week. He deemed himself lucky that no matter what was going on, Costas always found time to meet him out on the roof deck each night.

“Why do you say that?” Costas’s voice sounded off somehow, but Niko didn’t see anything troubling in his gaze.

“I’m sure you just need to find recipes with ingredients you like more.”

“Perhaps that’s it.” However, he’d purposely set out to pick ones that featured his favorite things, so Niko wasn’t sure he agreed but he didn’t want to hurt Costas’s feelings by dismissing his suggestion.

“The good news is that you’re trying.”

“I feel like all I’ve done since I got here is try new things. It’s been so wonderful to have so many opportunities. I can hardly fathom everything I’ve learned of this incredible Council and the people in it. I like my job even if it intimidates me still.”

“Sometimes we have to do things that scare us for our own good.”

“That does seem to be the case for me. I thought my anxiety would grow with new experiences but instead, I’m doing better at managing it. It certainly hasn’t come close to disappearing and I do freak out internally on a regular basis, but I’m slowly learning new ways to cope.”

Niko grinned at the handsome man reclining next to his chaise. Costas’s approval meant the world to him, but the most important person he’d impressed was himself. His dragon flew every few days and each time they soared together, Niko was granted more of his fortitude. Together Niko and his beast were forging themselves into a more confident version of himself, less reliant upon fear. It did help that everything that made him sick to his stomach was still in Greece. Niko still woke at night from terrifying memories of his time with his mates, but he refused to stay a prisoner to it. “Me too.”

“Elf’s excited about the law to help shifters get their training.”

“I know. I’ve been fielding calls from other shifter leaders for the past two weeks. You had a great idea, and I don’t see how it won’t be passed. There has hardly been any dissension.”

“I was inspired by you. You shouldn’t have had to shift by yourself without any training.”

As Niko examined his life, those scary minutes or however long he’d sat outside waiting for his dragon didn’t resonate as deeply as other moments. Yes, he’d been afraid, but his beast has assured him they were going to be okay. It was his position as mate to Andriana and Gelon that had broken him in so many ways. But those weren’t things he could speak to Costas about despite their close friendship. “I suppose not.”

“You have a faraway look on your face.”

“I was considering my past. It seems as if each day my picture of it alters.”

“Sometimes profound changes can do that. I had a similar experience when I had to leave here to take care of my parents. Suddenly I realized how much I’d taken for granted.”

“You gave up one family to do your duty to another.”

“Yeah, and it was cold comfort when my father berated me as my mother cried because she couldn’t figure out who either of us was.” Costas leaned his head back as he frowned. “I hope they’re happy now without pain or lacking anything they want.”

“Me too, and I’m sorry you weren’t able to resolve all your issues with them.”

“My father refused to listen to my feelings on any subject. I fooled myself into believing we could ever mend what was broken.”

“My father was much the same. It was his way and I had no voice.” Niko understood now that his parents had never loved him, and they’d kicked him out at the first opportunity. Growing up without their affection had made him believe he was the one lacking when the fault lay with them.

“You know, it’s been a long time since you spoke to him. Have you considered writing to him now? We know his kingdom is part of the Council.”

“I was cast aside because he disapproved of my mates. They are still the same. And that was simply an excuse anyway. I can see now that he never cared for me or my feelings.”

“Are you sure? Once they pass, there’s no winding back the clock.”

Niko turned to Costas and set his beer down. “Do you know I never learned to ride a horse?”

Costas lifted an eyebrow. “How in the world did you get around? It’s not like we had cars when you were young.”

“He decreed that I was to ride in a cart.”

“I was a shy child who was overwhelmed by things easily. I’ve mentioned before that my sister practically raised me. Nitsa was always there to take me outside to play or read me stories. My father hated it. He told me I did nothing but weep and hide behind her skirts. I think I was five or six years old at the time. When the other young boys were being given lessons in weaponry, he told me I wasn’t welcome to learn. He wasn’t going to waste any coin on having a blade made or take up any of the trainers’ time with the likes of me.”

Jessamyn Kingley lives in Nevada where she begs the men in her head to tell her their amazing stories which she dutifully writes it all down in what has become a small mountain of notebooks. She falls in love with each couple and swears whatever book she wrote last is her absolute favorite.

Jessamyn is married and working toward remembering to start the dishwasher without being distracted by the scent of the magical detergent. For personal enjoyment, she aids in cat rescue while slashing and gashing her way through mobs in various MMORPGs. Caffeine is her very best friend and is only cast aside briefly for the sin better known as BBQ potato chips.

She loves to engage with readers there. 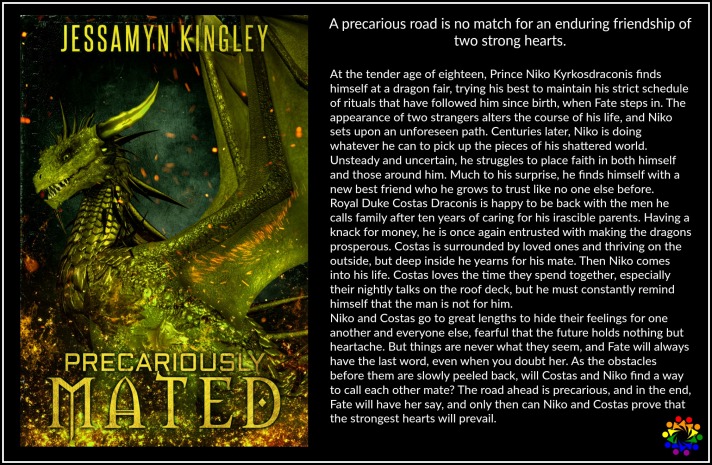