I’ve been a huge fan of Kaje Harper since I read her Tracefinder series. She has a great knack for creating characters with depth and slowly revealing their inner dimensions.

Tony is out and proud and a confident younger man, who is in a position of authority as a teacher. Mac is so not out, but very proud of the man and police detective he is. He’s carrying for his child and sacrificing everything for her. When Tony is a near witness to a murder, Mac is the detective who is given the case. It was inevitable that the two be drawn together. But it’s not insta-love. It’s insta interest, that evolves into a realistic journey between two men with very different needs and comfort zones. I enjoyed how each was given unique personalities and were confident enough to know his limits.

The mystery was fun and satisfying–we were given the right amount of hints to figure it out if we were looking. I’m not a reader of simple romance, but the story about the killer, the constant threats, the emotional turmoils, were all super engaging for a plotty reader like me.

The audio reader was SO GOOD! I am sorry to hear I have to wait for the next audiobook.
He had distinct voices and a steady delivery that was very expressive when needed. Love him and would seek him out for other audiobooks.

All in all, a great listen/read and I would highly recommend this MM mystery to any fan of the genre. 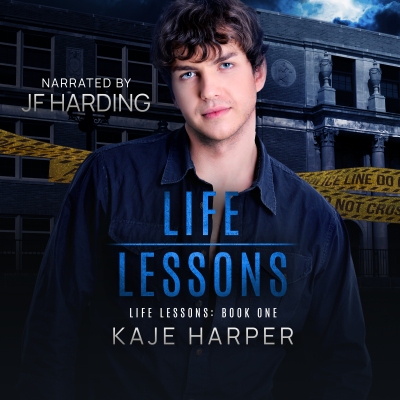 Tony Hart’s a dedicated teacher, though he’s not much older than his high-school students. Between his profession, a few good friends, and plenty of books, he’s content with his quiet life. Then the murdered body of another teacher falls into the elevator at his feet, and Tony’s life becomes all too exciting.

Jared MacLean is a homicide detective, widowed father to a young daughter, and deeply in the closet. But from the moment he meets Tony’s blue eyes in that high school hallway, Mac can’t help wanting this man in his life. Mac’s not out ― can’t afford to be out ― but Tony makes him want the impossible.

Mac isn’t the only one with their eyes on Tony, though. As the murderer tries to cover their tracks, Mac has to work fast or lose Tony, permanently.

(This is a rerelease of the 2011 original with light editing.)

Tony said after a pause. “You’re not the only person trapped in the closet. All those guys in the military, stuck with don’task, don’t tell; other guys with macho jobs or religious families. Lots of guys are doing it.”

“But you don’t want to,” Mac acknowledged.

“It wouldn’t be my first choice, no. I’ve put a lot of effort and pain into being out so I wouldn’t have to hide. But I do want you, and I know that comes on your terms.”

“Whatever. It comes with being secret and hiding whatever we have together. The question is whether that’s better than not having anything together.”

Mac wanted to shout that of course it was, but he bit his tongue.

Tony looked at him hard. “The other question you have to ask yourself is whether you want to take the risk. No matter how careful we are, you may get caught. A wrong look, a note in your pocket, someone tracking down your cell in an emergency; there are lots of ways this could come out in the open. It’s not a problem for me. But is that a risk that you want to take?”

Mac opened his mouth to say yes, and hesitated. How have I come this far this fast? He’d been willing to cut away anything in his life that risked his daughter Anna or the job. And sex had never been that important. But this wasn’t about sex; it was about Tony. And Tony had somehow become too important to cut away. It might hurt less to give up breathing.

“There’s never been anyone I could go to, to just be myself. I’ve never had a lover, or even a fuck-buddy. I thought I could live without that, but now… I don’t want to. Even with Mai, I wasn’t… I couldn’t relax completely. With you, I’m just me.”

“Yeah.” Tony smiled at him. “That’s part of being gay, you know. It’s not just who you want in bed. It’s who your emotional relationships are with the other twenty-three hours of the day, whose arms you want around you when life hands you shit.”

I get asked about my name a lot. It’s not something exotic, though. “Kaje” is pronounced just like “cage” – it’s an old nickname, and my pronouns are she/her/hers. I’ve been writing far longer than I care to admit (*whispers – forty-five years*), although mostly for my own entertainment. I write M/M romance, often with added mystery, fantasy, historical, SciFi, paranormal… I also have Young Adult short stories (some released under the pen name Kira Harp.)

After decades of writing just for fun, my husband convinced me I really should submit something, somewhere. My first professionally published book, Life Lessons, came out in May 2011. I now have a good-sized backlist in ebooks and print, both free and professionally published, including Amazon bestseller The Rebuilding Year and Rainbow Award Best Mystery-Thriller Tracefinder: Contact. A complete list with links can be found on my website “Books” page at https://kajeharper.com/books/.